THE G3P FRAMEWORK guiding the design process of games for purpose. (Zeno Menestrina) 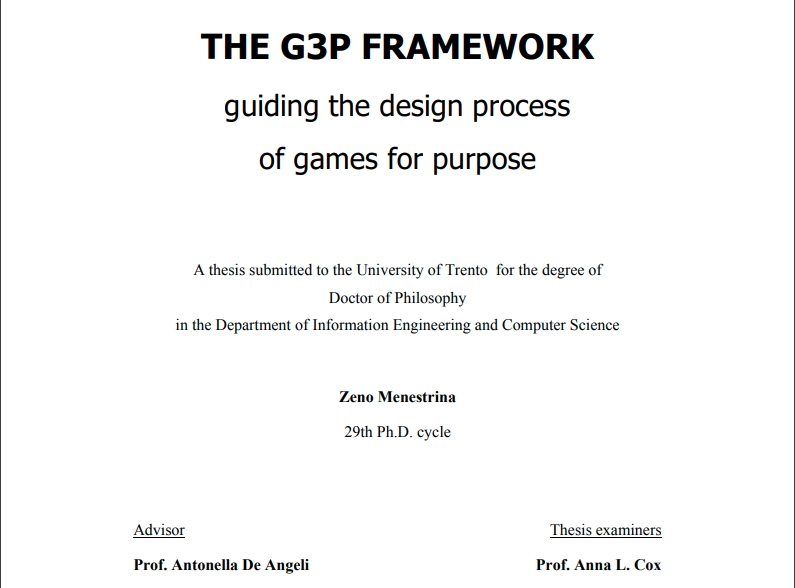 THE G3P FRAMEWORK guiding the design process of games for purpose

Video games were created more than half a century ago and have rapidly become part of the common culture. Hundreds of video games are developed each year, differentiated by elements such as genre (e.g., puzzle or action), technology (e.g., virtual reality or handheld consoles) and audience (e.g., casual or hardcore gamers). Over the years, interest has grown in using video games for more serious purposes, intended to teach, train or inform. These games are designed exploiting a playful component to stimulate users to achieve specific goals. In general, video games have a complex design consisting of various interrelated elements and strongly influenced by the needs of players. The addition of a serious purpose increases this complexity, making the design of an effective product more challenging. This thesis focuses on the development of video games for purpose, proposing the G3P, a framework to drive the process of design. The G3P instantiates different game design theories in practice, adapting them according to a participatory approach in order to structure the design process. In this renewed perspective, different stakeholders are involved, contributing to the definition and articulation of the various elements of the game. In favour of this process the author presents the development of Skies of Manawak, a video game for neurocognitive training targeted at children with dyslexia. The design and implementation of this video game ran over two years and was divided into several stages. From the first conceptualisation to the release of the game, the stakeholders - domain experts and players - were involved. Each phase was aimed at the extension of the design and the revision of the overall work. The results collected from workshops and testing activities allowed assessing the effectiveness of Skies of Manawak in terms of player experience and cognitive training. In this regard, the analysis of the related work grounded the G3P framework; the various design activities held during the development of Skies of Manawak completed it. This manuscript represents a contribution to game design theories of video games for purpose, supporting the theoretical foundation of this research topic, still young but rapidly growing.